What is Built Up Polyurethane Foam? 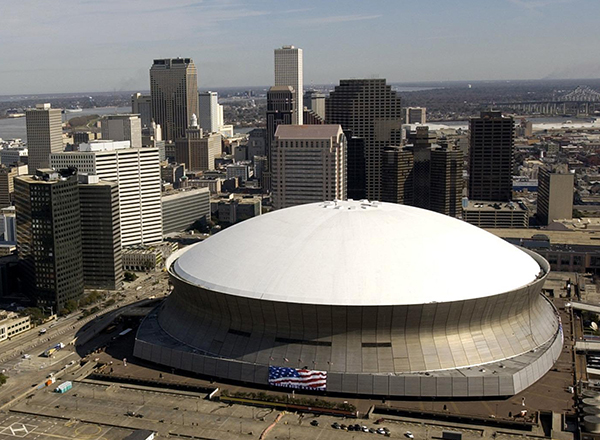 In 1974 Louisiana built the Superdome, the second domed stadium ever constructed at that time. As they explored roofing options, it became clear that a polyurethane roof system addressed most of their concerns.  It’s lightweight nature allowed for cost savings in structural design, unsurpassed wind resistance necessary in a hurricane, and excellent fire resistance characteristics. (image credit - David J. Phillip /AP)

Polyurethane Built-Up Roofing has been used as a roofing and insulation material for over 45 years. During this time, Polyurethane Built-up Roofing systems have proven themselves through comprehensive, independent studies to be dependable, long lasting, and very affordable. Today there are polyurethane roofs that have been in place for decades, and by all appearances they should be able to last indefinitely as long as they are properly maintained. The bumper on your car is likely to be made of the same material.

Because Polyurethane Built-Up Roofing is sprayed onto the roof as a liquid, it forms a single continuous structure that is seamless and very stable. It requires a clean surface for proper application. It must be dry, free of contaminants like oil, and properly fastened to the substrate in accordance with the proper building codes. A UV protective layer (typically reflective ceramic coating or gravel) is required which is typically sprayed on as well. It is also possible to repair damaged areas with trowel, or roller applied material..

Polyurethane Built-up Roofing has many advantages over traditional roofing methods, and as you read through this web site you will learn a lot more about them. Here are some brief examples:

1. Seamless: Polyurethane Built-up Roofing is applied as a liquid, creating a single monolithic membrane that covers the entire roof. There are no seams or joints, the source of the majority of leaks in traditional roofs.

2. Flexible: The Polyurethane Built-up Roofing can be sprayed onto virtually any surface, irregularly shaped roofs and protrusions are readily taken care of.

3. Lightweight: Polyurethane Built-up Roofing typically weighs around 50 lbs. per square, versus 800 lbs. for a built-up roof and 1000 lbs. for ballasted single-ply roofs.

Insulation Properties of Polyurethane Built-Up Roofing Systems:
Polyurethane Built-up Roofing has an R-value of 7.14 per 1 inch thickness, enabling it to provide more thermal resistance with less material than any other type of roofing insulation.

Polyurethane Built-up Roofing produces energy savings of 30% or greater when compared to the alternative roofing systems. The cost of the roof can be easily recovered in under 5 years, simply through these energy savings alone!

Insulating Freezers, Tanks and Other Structures:
Polyurethane Built-up Roofing systems are frequently used to insulate and protect a wide variety of special structures. It has been used with great success in the oil industry, chemical process plants, even in the wine industry.

Waterproofing Ability:
Polyurethane Built-up Roofing is perfect for many different waterproofing applications. Because it is composed of billions of closed cells, it acts as an air barrier, preventing moisture infiltration into the building. This ability minimizes dew point problems, which unchecked leads to water condensation inside of the structure. Moisture infiltration into the building envelope is the number one cause of building deterioration.

Even when the top coat of  our roofing system is damaged, the underlying polyurethane will keep the roof from leaking. The Superdome in New Orleans was damaged once in a severe hail storm. Thousands of hairline cracks appeared in the top coat, but no leaks ever occurred, even though it wasn't repaired for over a decade!

If a penetration does occur all the way through the layers, the water infiltration will be isolated only to the area where the membrane has been penetrated. Small penetrations in our roofing systems can be repaired easily with an caulk like material, reinstating the integrity of the system.

Water ponds are quite often a problem with conventional roofing systems. When applying the polyurethane system in re-roofing situations, it is very easy to build up areas of greater thickness while spraying. so that water will drain properly. This also eliminates the problem of the additional weight load associated with water accumulation.